I will not make a habit of writing special edition blog posts but my experiences at the demonstration yesterday left me with much to say and few people to say it to.

Here is a rough assembly of footage from the march and the subsequent riots, I think they might make their way into my film or become a self-contained short piece called â€œBread and Circusesâ€ I haven’t decided yet…

Now for the wordy bit… 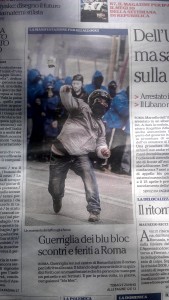 A nation-wide day of anti-austerity protest was organised yesterday. The demonstration in Rome counted about 20.000 people and I was pleased to see that the vast majority were a healthy and peacful mix of ages, backgrounds and gender.

What the day will be remembered for however (also thanks to the media’s massive focus on this aspect) will be the clashes between protesters and police.

What I want to write about though isn’t the clashes (Italian newspapers seem to be doing a lot of that without mentioning any of the reasons for the protest; namely the austerity measures of Italy’s third unelected â€œtechnicalâ€ government in a row) but about the profound disappointment in seeing protesters, who I would side with ideologically behave like fascist thugs
It makes me think of that quote: â€œIf you’re not a liberal at 25 you have no heart, if you’re not a conservative at 35 you have no brainâ€ (apparently Churchill never said these words but still, at the age of 31 I’m reminded of them as I write and I shudder).

THE ANGRY AND THE BRAVE
Moving on, not-so-swiftly to the main reason for this post, I was surprised and disappointed to see that the protesters themselves were extremely hostile towards me; one trying to rip the mic off the camera and another attacking me with a placard and trying to whack the camera out of my hand.
In the meantime journalists wearing motorcycle helmets (note to self: bring helmet to next demo I intend to film) and the police cameramen (real threat to them being identified) were filming undisturbed.

These episodes shook me quite a bit and I then missed some of the main action when I went off to lick my wounds (not literally) which brings me on to the next consideration:

How brave are those camera people who dive into the middle of the action just so we can see what has been happening?
Amidst the smoke, the shouting, the loud explosions of home-made devices (one protester apparently lost his hand when one went off early) and people stampeding in all directions I found it extremely difficult to get the shots I meant to, focus, framing, duration of shot, all basics of proper filming went out the window as I ran around, scared and confused amidst the madness.
Watching over yesterday’s footage I couldn’t help thinking I could’ve done a better job, especially covering the main clashes which, at one point I simply walked away from.
It certainly was a steep learning curve and absurdly, with the benefit of hindsight I’m looking forward to the next time I’ll be filming in such high pressure situations.

WHAT GOOD MAY COME
I often sympathise with protesters who defend themselves when police forces try to repress a spontaneous popular uprising. I’m opposed to violence in general but I can see how these reactions (like Egypt for example) stem from true desperation and the impossibility to change things in any other way.

What I saw on the streets in Rome yesterday was different, violent protest has become a thrill-inducing activity for people who clearly intended to fight and who, in spite of their supposed altruistic ideological background had no consideration for other people, not for their safety nor for their intersts.
As for the good that might come of these actions I frankly despair.
The whole demo was easily dismissed as a violent mob making the march of the other 19.700 people meaningless to the broad section of the public who might have been inspired by such broad and popular response to political injustice.

Alas the talk on the town has been about the scared tourists, the clean-up costs and the boy who lost his hand; very little debate on austerity has risen from the ashes of yesterday’s events.

PASOLINI’S 1968 POEM: AS RELEVANT AS EVER 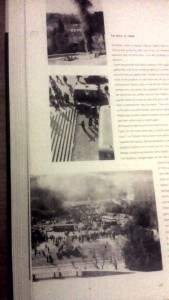 Clashes in Valle Giulia between protestors and police referred to in Pasolini’s 1968 poem “Il PCI ai Giovani”. These pictures were taken right outside the British School at Rome (!).

The whole episode yesterday left me quite sad and disillusioned with regard to the possibility of change in this country that I love/hate so much.
It reminded me of a poem by the great Roman writer, filmmaker and philosopher Pierpaolo Pasolini which dates back to the riots of the late 60s but could be applied just as to the events from yesterday.

Coincidentally this morning I fulfilled my “cappuccino e brioche” breakfast ritual at Nacci’s in the Pigneto area where Pasolini himself would often go to have his coffee, I wonder if he thought this poem up there? (I’m pretty sure Pasolini wasn’t taking smartphone pictures of front page protest-related photos so he could post them in his blog… then again, if he could have he probably would’ve).

This is a fairly literal translation of and excerpt of the poem but it is the best the internet could offer and it saves me having to translate it myself.
The original text can be found here.

Its sad. The critique of
the pci should have been done in the first half
of the past decade. You are late, children.
And it doesn’t matter that at the time you were not born.
Now the journalists of the entire world (the t.v.
ones included)
kiss your (as they still say, I think, in
university) ass. I don’t, friends.
You have the face of daddy s boys.
Your clean appearance doesn’t lie.
You have that mean look.
You are afraid, uncertain, despairing
(very good) but you also know how to be
spoilt, scheming and arrogant:
petit-bourgeoise values, my friends.
When you were at the Villa Giulia yesterday you brawled
with the police,
I sympathised with the policemen!
Because policemen are sons of the poor.
They come from the outskirts, urban and rural.
As for me, I know well,
I know how they were as little kids and young men,
the precious penny, the father who never grew up,
because poverty does not bestow authority.
The mother calloused like a porter, or tender,
because of some disease, like a little bird;
the many children, the hut
among the orchards overgrown with red weeds (on someone else’s
land); the slums
over the sewers;or the apartments in the vast
council estates, ecc. ecc.
And, look how they dress them up: like clowns,
with that rough cloth that stinks of
uniform and poverty. Worse of all, naturally,
is the psychological state to which they are reduced
(for a handful of dollars a month):
with no more smile,
without any friends in the world,
apart,
excluded (in an exclusion without equals);
humiliated at the loss of their human values
in exchange for police ones (being hated breeds hatred).
They are twenty, your age, my dear boys and girls.
We are all obviously against the institution of the police.
But try going against the courts, and then you’ll see!
The boy policemen
that you, out of the sacred violence (of the venerable risorgimento
tradition)
of the daddys boy, have beaten,
They belong to the other class.
At Valle Giulia, yesterday, occurred an instance of
class war: and you, my friends (although on the
right side) you were the rich,
while the policemen (who were on the
wrong side) they were the poor.A nice victory, then,
yours! In these cases ,
to the police you should give flowers, my friends
[…]

(Please not that this is an exerpt of the poem which is 4 times as long and Pasolini twists and turns, changing his mind as too who is at fault throughout)