This is an eclectic mix of moving image work that is either very old, from the formative years at university or it is a trailer for a film that for one reason or another never made it to completion. this are still worthwhile and fascinating projects but for now they’ll have to remain in this limbo of trailers and short films… 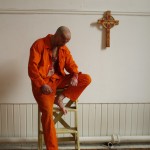 In his quest to draw attention to the surreptitious practice of torture by governments around the world Jeff has become obsessed with questions on pain and violence; the crucifixions of his models sometimes push the boundaries between reality and role-play.
In the past months Jeff has even started to self-harm, covering his body with hundreds of cuts and scars.

As a carer for James, a boy affected by Muscular Dystrophy Lukazs felt compelled to pick up a camera and tell this story of a teenager with girls, video-games and explosions on his mind. A refreshing and intimate film about getting on with your life.

An old lady reminisces on her first encounter with organised religion when her and her sister in their early teens are accidentally caught up in a Presbyterian gathering.

Short experimental piece aimed that emulates the themes and styles of German Expressionism.

When the somnambulist wakes up in a room with a box he begins to battle with his fears and temptations.