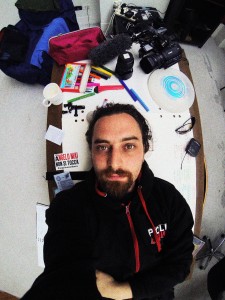 This is what my thoughts look like these days

Things started nicely enough: My wife and kids arrived to visit bringing me no end of joy and distracting me a bit from the initial weeks of full-on work!

However things did not grind to a halt as I’ve tried to move multiple projects forward simultaneously.
There are currently 3 films on the go (one of which is actually a trilogy of mini-shorts).
Of course everything is very fluid and I know that not all my ideas will materialise but I’m feeling profoundly inspired by this city and the many stories that inhabit it, my only concern is just how to do justice to such complex stories with so little time to understand them and to become part of them.

So what were the problems I referred to in the title?
– It all started with my casual filming at the Vatican becoming an issue of national security: my tripod lead the Carabinieri (Italian military police, the butts of jokes in Italy) to have a lengthy discussion as to whether I should be allowed in to Easter Mass (in the meantime they missed the fact that I had a penknife in my bag and no ticket for the event (some jokes are funny because they are funny, others are funny because they are true).
– Then my main character, a Gladiator impersonator who makes his living by posing for pictures with tourists and who’s planing to change his line of work to start rickshaw driving backed out of the project leaving me without my observational doc project…
– Then one of my cameras started acting up big time with weird focus issues occurring in strong light scenarios. This is the camera that got hit by a placard at a demo so it’s currently in a Canon repair centre and they are trying to figure out what is going wrong.

On top of all this there was a moment of panic when accommodation fell through for my family and we literally didn’t know where Juszti and the kids would be sleeping from the 30th!

The good news is that all these challenges have clarified my ideas and given me some perspective to crystalise the ideas I had floating around before:
– I’ve decided to focus on gathering all the footage I need as the postproduction can happen at a later stage.
– I’ve realised that characters who take part in your film just for money will sooner or later become a nightmare.
– I’ve come to terms with the fact that I will never be able to tell all the stories of Rome and should not regret the stuff I miss but pick a line and follow it!
– at the same time I’ve been learning lots about boldness and believing in yourself and the authority that this projects to the people surrounding you.

The beautiful thing is that this residency is doing exactly what it should do: it is giving me the time and the opportunity to try new things, experiment with my documentary language and discover the kind of filmmaker I want to be.
All the challenges along the way are helping me along on this journey and I come out at the other end of the dark tunnel that this week has been (professionally) I can’t help but think of a sentence that my old man liked to quote in times of distress:
“Problems equals opportunity.”

Well I certainly have lots of opportunities on the plate… let’s see what I can do with them!