This Entry was written about three weeks ago but I was not able to share it for reasons that will soon become apparent:

Such a great story and no one to tell it to.

I had finished my day’s work at Garbatella, a quaint Fascist hobbit-house district in southern Rome so I hopped on my bicycle and made my way North through Central Roman rush-hour traffic towards Villa Borghese and a warm meal at the British School.

When I got to Piazza Venezia however I noticed that the traffic was (if possible) even more bottled up and hectic than usual, there was something in the air… then I saw an unusually large number of Riot Police vans with their flashing lights on… a demo!

Rome seems to have at least a demonstration a week, sometimes two. People are finding it hard to make money, Italy is massively in debt, politicians are corrupt and no-one has any confidence in the system. 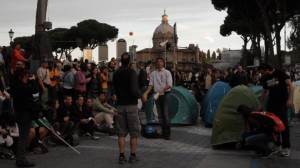 Demonstrations range from far left to far right and all the colours in between, one week it was housing, then austerity, a pot legalisation demo and when these happen and main arteries in the city are shut off then the traffic really goes wild!

I took it as a sign, another demo, against the beautiful backdrop of the Altare della Patria and a robust cordon of Carabinieri in their riot gear facing the demonstrators… I got my camera out and started filming. The protesters were peaceful and I made a point of asking people if they minded being filmed so no unpleasant incidents like the last time. The protesters were staging a sit-in with tents (apt for a demo demanding affordable housing) blocking Via Dei Fori Imperiali, the road that connects the Colosseum to Piazza Venezia and on North from there.

At one point I really felt like joining them, but I carried on filming, the light was beautiful and because I had my tripod the shots were much steadier than the last demo I filmed (which looks like a homage to Blair Which Project cinematography).

The situation was surreal, tourists were actually taking selfies leaning against the shields of the Carabinieri cordon and a row of cameramen and photographers (including me) lined the space between the cops and the protesters’ tents, this seems to be a well rehearsed formation. 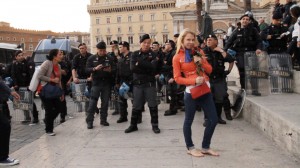 At one point I was filming the journalists, literally a row of them, all I could see where open MacBooks and eager fingers plugging in card readers and uploading pictures, fresh off the “press”.
A guy sitting on the pavement right next to me asked why I was filming them.

He was a handsome man, young looking, in spite of some grey hairs in his well trimmed beard. He wore a thick kaki jacket and I could tell from the tilt of his baseball cap that he wasn’t one of the demonstrators (funny what a detail like that can give away).

I instantly became curious; sitting half way between the police cordon and the protest, not taking pictures or participating in any apparent way.

He asked me of course why I was filming and who for etc… and we got chatting. I asked if he minded being filmed and he said “he couldn’t” and then I got even more intrigued…
We chatted and chatted about the demo, about what a pity it is when they get violent, and about ourselves, our families and all that. It was an unusual spot I admit it but I really clicked with this guy. It wasn’t long before he leant forward and told me he was actually a Carabiniere in plain clothes.

From then on he chatted quite freely about the need for someone to protect public order and that it’s in the interest of public safety and that the “lads” were standing there all day and even though they respect people’s right to protest, if someone is throwing cobble stones at them they’ll lose their patience pretty easily.

I was truly enjoying our conversation and thinking again of that Pasolini poem ‘Lettera ai Giovani del PCI’ about the police being children of the working class while the protesters were young bourgeois youngsters when a “friend” of his sat down next to him (lets call the first guy Andrea, and his newly arrived friend Carlo).

Carlo, clearly another Carabiniere, joined in the conversation, in a jovial but quiet manner, he then leaned over and looked at the sound recorder hanging round my neck and pointed out that it was recording…

I would be a lier if I said I wasn’t aware of it being on, it certainly wasn’t anything usable in a film, however, I simply had left it on from earlier on, when I had been filming the protesters.

Andrea’s jaw dropped…
I must have gotten quite pale myself.
Carlo’s tone changed. He spoke softly but firmly, with such a forced smile his lips hardly moved.
He wanted to know who I was working for what it would be used for and so on, that if I published it and “ruined Andrea’s life he would ruin mine” (!!!).
Andrea intervened and said I was an alright guy, that he believe the recorder had been on from before and that he was sure I’d delete it if they asked me.
I told them I would. No heroics, I just said ok, I didn’t like the direction this was taking, Carlo was now fitting his radio earpiece into place and I didn’t want to mess with Carabinieri.

I don’t know if it was the nerves, or the recorder’s counterintuitive menu or simple stupidity but I couldn’t for the life of me find a way to delete a single file and it was all getting a bit embarrassing and uneasy. I don’t know who spoke the dreaded word first but it came up: ‘format’… “format the card”

I hesitated.
That card had all my atmospheric sounds from Garbatella, gleaned throughout the day: trains, fountains, birds, traffic etc…

I told them my predicament.
I truly felt bad for breaking Andrea’s trust and to make things worse Carlo started listing squats in Turin and asking me which one I belonged to, he mentioned names and asked me if I knew any of them… unbelievable!

Then as if he felt the “hard way” wasn’t working he suddenly said to me: “Do you know where I work in the Vatican? Right up under the Pope. If you find a way to delete that file I can get you in there one Wednesday Mass for some filming”

I don’t know why but I believed him. And yet he insisted on showing me pictures of him hugging high-ranking clerics outside St Peter’s during one of the Masses that occur in the square.

I still believed him.
To cut a long story short, we, shook on it, I formatted the card and we exchanged numbers.
That was it, the entire day’s recording gone in exchange for the promise of a Carabiniere. I must be mad!

Andrea and I resumed chatting as if nothing had happened. Amazingly a minute after sharing numbers and our names he had googled me up and was showing me pictures of me from the search result. 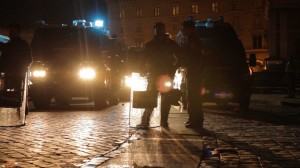 The Carabinieri on guard into the night.

Things were odd… the situation had been diffused and all seemed normal.

I decided to split, too wound up by adrenaline and not sure it would be safe to return to the sit-in site after spending an hour talking to guys with a way too tilted baseball cap I headed back to my bike after saying goodbye to the two undercover officers (Andrea and I even kissed on the cheeks, a sign of great friendship in Italy).

At home I found no one to tell the story to! I literally went an knocked on a neighbour’s door to tell someone… she told me to write it down. And here we are…

Oh, there is a way to delete just one file. FUCK! FUCK! FUCK!
That Carlo better keep his word about filming the Pope!!!

So the next week “Carlo” couldn’t get me into the Wednesday mass because he had to look after his kid.
The following week it was work engagements in Caserta (God knows what he was doing there!)…

Finally I had given up and assumed this guy was going to wriggle out of his commitment… then last tuesday I got the text: “I’ve picked the tickets up, see you at 0715 outside St Peter’s sq.”

Carlo kept his word, he got me up onto the “sagrato” the space right outside St Peter’s doors where the Pope gives mass. I was just about 20 meters from Ma’man Francesco. the footage was great and I’ll find a way to weave it into my “Passion” film when I finally get round to editing it 😉 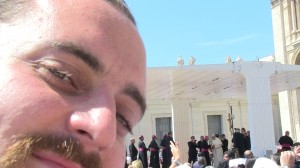 So what’s the moral of the story?
Carabinieri can be trusted?
Surreptitious recording is ok?
One crap turn can turn out to be a great opportunity?