This page covers the various articles and news pieces about my films over the years. Languages may vary from English to Italian and from Russian to Arabic but I’m sure that’s something you can handle.

Entries are in chronological order starting with the most recent. Feel free to scroll through all the film-chat, gossip and media bling.

Having swept the board at the Jim Poole Scottish Short Film Awards, the La Belle AllÃ©e Productions/GMAC shortcuts production Archive of Dreams has gone on to claim another award in the up-and-coming Turin Film Festival.

Produced by Lindsay Goodall and Directed by TomÃ¡s Sheridan, Archive of Dreams was shot over five weeks in the northern Italian town of La Spezia, and tells the story of dedicated film collector, Carlo Roda, and his extensive cinema library. The documentary is proving exceptionally popular amongst audiences, and received positive feedback when it was screened at Encounters the week before screening twice in Turin.

Entered into the “Spazio Torino” competition, Archive of Dreams claimed an honorary award created in memory of Chicca Richelmy, the famous artist and filmmaker.

The short will now go on to be screened in Florence: “50 Giorni di Cinema Internazionale a Firenze” which will be held in Mediateca Toscana. 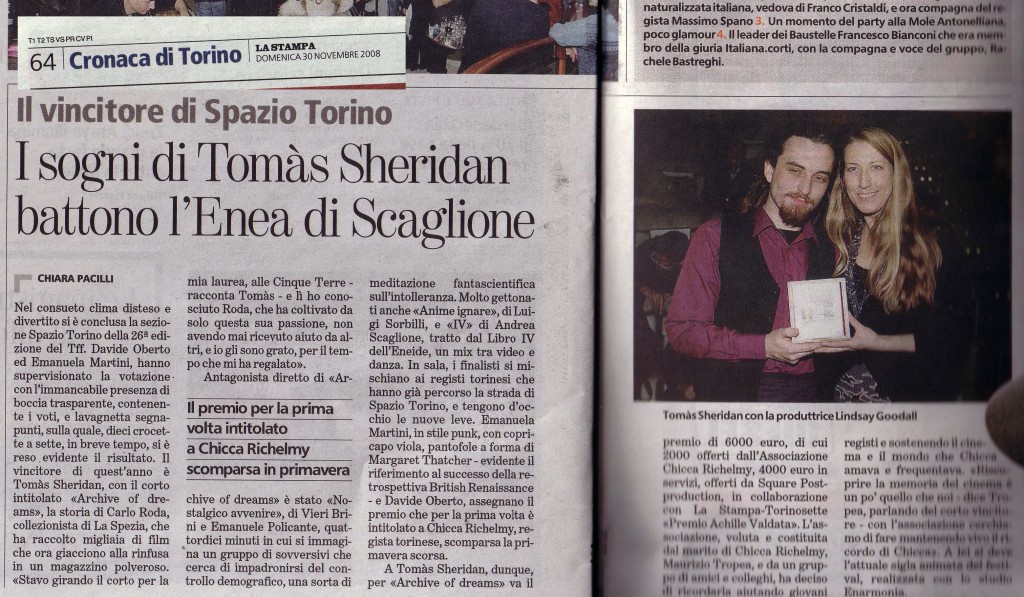 Produced by Lindsay Goodall and directed by TomÃ¡s Sheridan for La Belle AllÃ©e Productions, Archive of Dreams swept the board at the Jim Poole Scottish Short Film Awards at the Cameo Cinema on Sunday 12 October 2008.

Funded by GMAC shortcuts, and shot over five weeks in Italy, Archive of Dreams tells the story of Carlo Roda and the amazing films he has collected over the past 30 years. Having once trawled shut-down cinemas and rubbish dumps for forgotten gems, his lifeâ€™s work now sits in a damp, dusty warehouse. This is the story of an incredible film collection and its cynical owner, whose world is turned upside down as a group of local film lovers invade his archive of dreams in an attempt to rescue these pieces of cinematic history.

Producer Lindsay Goodall stated: â€œHaving struggled by on a very tight budget, winning these awards is fantastic for the crew who were involved both on the shoot in Italy, and during post-production in Glasgow. Weâ€™re really proud of the film, and are anticipating success on the festival circuit.â€

– A Guide To Taking A Photo (Craig Slattery)

The two prizes at arguably Scotland’s most prestigious short film competition have gone to the one entry.

Tomas Sheridan’s Archive of Dreams has taken both the judges’ and the audience awards at the Jim Poole Short Film Awards.

The award was set up nine years ago in memory of the late Jim Poole, the driving force behind the Cameo Cinema, in Edinburgh, becoming an arthouse cinema. The judges’ award carried a prize of Â£1000, while the audience award was for Â£500.

TomÃ s Sheridan is 25years old. He graduated one year ago in Photography and Cinema at the University of Edinburgh. Now he is a filmmaker full of ideas and passion who has produced some short films. Next week he will end the filming of his new movie: a documentary on the archive belonging to Carlo Roda, a well-known movie amateur and movie projector from La Spezia

– How did this project come out?

Two years ago I was finishing one of my short films, and the last scene was to be on a sea cliff. Alessandro Palermo introduced me to Carlo Roda on set and he told me about his life dedicated to cinema. I was impressed by his shy and silent temper, but that demonstrated high proficiency. I never forgot our meeting. I then found out about a fund for graduate students that awarded money for research projects. I then involved Leo Bruges, a class-mate and friend, and contacted Carlo again.

– I can imagine it was a long and intense period of research. Did you have any problems?

Assembling the documents and most of the funds took 18 months. I made contacts with cultural centres like Bardonecchio in Bologna, but with no success, which was a big disappointment. In November I wrote to G. M. A. C. (Glasgow Media Access Centre). It was a hard competition: out of 200 projects only 7 projects were funded.

– When I found out that a young movie director was making a documentary about Carlo Roda I was proud. What was his reaction? Was he there during shooting?

Well, not really. The fact he accepted is exceptional. Sometimes I even tried to be humorous with him but I felt he was kind of irritated by all this. The only thing he told me was that he was emotional.

– He was somehow able to spread his love for Cinema.

For sure. When he talked he did not limit it to making observations on style, themes, contextâ€¦ His was a practical and emotional experience.

– Do you believe that La Spezia has somehow helped Carlo Roda?

Many people thought that they were helping him, but not everyone had the patience to really understand him. La Spezia is a small city with its problems, as every other city of its kind, such as space. I found here a second home, new friends. I also found hopeless faces and faces full of interest like in the young kids of the Loggia dei Banchi cultural bar. We must not forget that passion and energy are the elements that keep a culture alive â€¦ maybe Carlo was a little tired lately.

– I agree. In the city the memory of the Cinema Candor is still alive: did his friends mention it?

They describe it as the best moment of his career. He was completely free. He did not admit it, but I believe that his aim was to educate people through the Cinema.